On Wednesday July 11, 2018 at 1900 hours, the Crawford Township Volunteer Fire Dept invites you to join them for the dedication ceremony and blessing of their newly purchased Fire Engine.The new engin...
➜
Currituck County Stands To Support Wounded Warriors

On Sunday January 14, 2018, the Crawford Township Volunteer Fire Dept; along with other Emergency Services and the community, lined Caratoke Hwy with flags flying high in honor of our Wounded Warriors...
➜
About us

The Crawford Township Volunteer Fire Department began operations in 1974 with 25 charter members. The first fire station was the current Maple Station, which is located on Highway 158 in Barco. The new station was originally a service station and was converted to handle its new duties. After many years the station was purchased by the Currituck Ruritans with a a down payment of $1,800. The first fire apparatus housed in the new fire department was an open cab Seagrave engine which was purchased for just $1.00 and a 1947 Ford Engine purchased for only $700.00

Due to growth within Crawford Township a satellite station was acquired in Sligo at the intersection of Highway 168 and 32. The original building was destroyed by fire in 1989 and with the help of the community and the volunteers, a new, more modern building, was built and now serves as head quarters for Crawford Township VFD. Three pieces of apparatus were purchased from Virginia Beach in 1990. Over the years, the department added a third station close to the courthouse area to meet the new six road mile rule. This station houses an engine, tanker and the ladder truck.

Crawford Township VFD has seen many changes since the first members manned the trucks. Requirements from the State of North Carolina mandating training requirements have become more difficult to meet. Equipment changes have made it necessary to have on-going training to make sure everyone can operate the equipment, both proficiently and safely.

Most recently, the Crawford Township Fire Department, its members, and the community have seen several changes and advancements to benefit the community. In 2013, 2 additional bays were added to the Sligo Station and in 2014 the members took on two major accomplishments. First, they were forced to replace their 1972 ladder truck after it failed ladder inspection. This was done so with the purchase of a 1989 100 foot Sutphen platform. Secondly, in October of 2014 the department voluntarily took on the challenge of a state ISO inspection and testing of the method three water shuttle. When the results came back from the North Carolina Office of the State Fire Marshall they confirmed what this membership already knew. The department had improved their rating to a five with the method three. This rating will help approximately fifty percent of the homeowners in their district with their homeowners insurance and most importantly, reconfirms the commitment of this department and its members to the citizens and community it serves. 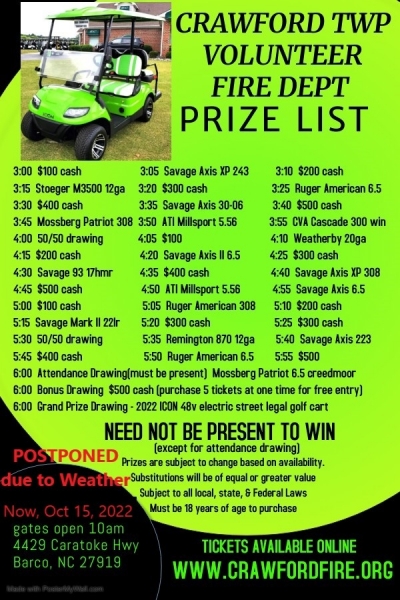 This site has been viewed 112,606 times.
Calls
News
Events
Pictures
Apparatus
Maintained by the members and staff of Crawford Township Volunteer Fire Department. Designated trademarks and brands are the property of their respective owners. Copyright © 2006-2022. YourFirstDue Inc. All Rights Reserved. Content on this web site is supplied by Crawford Township Volunteer Fire Department. YourFirstDue Inc. cannot be held responsible or liable for any content, text, pictures, or any other media found on this web site.
Management login
Powered by